Holiday apartments "Gerber 4 Residence" A15 and A106

Spend a visit to Bulgaria, and will stay on the Black sea coast, perhaps in sunny Sunny Beach, then a visit impossible to imagine in Nessebar. sniffing ready for a day of culture and great shopping. And you think even a cool drink on a terrace between the old buildings. Do not hesitate, visit Nessebar. 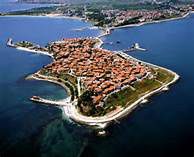 Nessebar is one of the oldest cities in Europe. In the 6th century BC. Nessebar was founded by Greeks, they called the city Mesambria whose Slavic Nessebar is derived. The remains of Greek culture are still visible. Byzantine basilicas and the typical houses built from limestone and wood Renaissance. Nessebar, then Mesambria was in the 4th and 3rd centuries BC. a very important trading center, but that was after the conquest by the Romans in 72 AD. not more so. In the 13th and 14th century, most churches were built and Nessebar had its best years under the Bulgarians. However, it was not until the 20th century Nessebar city of Bulgarians and it has become very touristy, you can set it so it Nessebar since then lives off tourism. Nessebar even has a place on the World Heritage List since 1983. 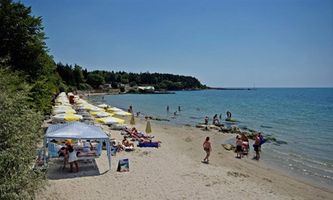 Nessebar also has some beaches, in the northeast of the old town of Nessebar you will find two small pebble / sandy beaches, one of which overlooks the harbor. In the south of the old town of Nessebar is a vast gravel / sand beach. This beach is surrounded by cliffs. The last beach you can find in the south of the new center. This is a long sandy beach.

Nessebar is in itself worth the visit, with its beautiful streets, old buildings, and extremely cozy shops and terraces. But of course here are also sights not to be missed. 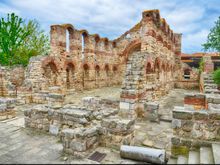 Dit is de grootste kerk van alle kerken in Nessebar. Op de plek waar de "agora" was, het marktcentrum van de oude Griekse stad, is deze kerk gesitueerd. De Basiliek is gesticht aan het eind van de 5de eeuw maar werd herbouwd, 400 jaar later.In de middeleeuwen was dit bouwwerk het Godshuis.This the largest church of all churches in Nessebar. At the spot where was the "agora", the market center of the ancient Greek city, this church is located. The Basilica was founded at the end of the 5th century but was rebuilt 400 years later.In the Middle Ages, this building was the house of God. 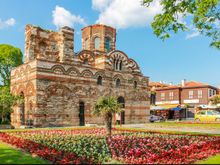 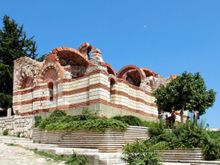 Along the coast runs a local train back and forth between Nessebar and promenade, for little money, you can join this train. It is an open train so you can all the way to enjoy a delicious sea breeze and you get everything you better bring along the way a lot than if you could take a taxi. Very nice, especially with kids!Holds when visiting Nessebar account the many cobbled for wheelchairs and strollers this section very difficult to access. There is also a section with just tarmac but especially the part with cobblestones is very nice.